Alicia Keys Said She’d Love to Collaborate With Billie Eilish: “Why Wouldn’t We?” 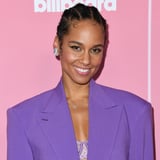 If Alicia Keys says it’ll happen, then I trust it will. In an interview at the Billboard Women in Music event in LA on Thursday, Keys – the recipient of this year’s impact award – said she would love to collaborate with Billie Eilish. Is anyone else freaking out right now? “I feel like, why wouldn’t we? That’s how I feel,” Keys said when asked about a potential collaboration. “It would be so fun and beautiful and powerful.”

Eilish has been a fan of Keys for years now, and she even recorded a cover of “Fallin” when she was 12 years old, which Keys recently saw. “I was super shocked,” Keys said of the cover. “It was amazing. She’s really, really, really on fire, and she’s a beautiful soul.”

“I would die and pee my pants if we could do something together.”

Eilish, who was honored as woman of the year at the event, was also asked about her thoughts on doing a collab with Keys at the event. “I just wanna respect [Alicia] as she is,” Eilish said. “I mean, obviously, I would die and pee my pants if we could do something together, but I wanna be friends.”

After seeing their heavenly “Ocean Eyes” duet on The Late Late Show With James Corden on Monday night, I already know that whatever these two come up with is going to be absolutely spectacular. Watch the full video above to see what Keys had to say and keep scrolling to see Eilish’s interview.