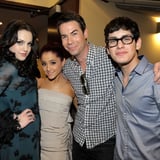 Ariana Grande previously teased fans on Twitter saying that the Atlanta stop of her Sweetener tour would be a big one, and she wasn’t exaggerating. On Nov. 19, the Thank U, Next artist took her fans back to Hollywood Arts High and staged a reunion with her former Victorious costars, Elizabeth Gillies and Matt Bennett.

Grande and Gillies – who played Cat Valentine and Jade West on the series, respectively – performed the iconic hit “Give It Up!” from the “Freak the Freak Out” episode, which is still a bop. The former Broadway stars smashed their duet so well, we wouldn’t be upset to see a musical collaboration in the future. “The best moment of my life @lizgillz,” Grande wrote in her Instagram Stories alongside fan footage of their onstage duet.

Bennett, who played Robbie Shapiro on the show, took the stage to perform “I Think You’re Swell,” the love ballad his character wrote for Grande’s. He also belted out the Victorious theme song “Make It Shine” with fans in the pit, and it was pretty swell, indeed. “This was too much to process and [I] don’t know what to say yet but so grateful and thrilled,” Grande said after the show. Same, girl.

the most special show to me yet. truly. love u. this was too much to process and don’t know what to say yet but so grateful and thrilled. love u forever @LizGillies @MattBennett.

Bennet, Gillies, and Grande have famously stayed close friends after their stint on Victorious, with the two making cameos in the star-studded music video for “Thank U, Next” last year. The two even joined Grande onstage for her performance of the hit, appropriately decked out in Christmas gear. Fans were understandably besides themselves at the performances, especially since they occurred after Grande had to cancel her concert in Kentucky due to falling ill. Check out the videos of the trio together ahead, as well as all the messages shared by Grande, Gillies, and Bennett before and after the show!

Ariana Grande Reflects on the 1-Year Anniversary of "Thank U, Next": "My Heart Feels Good"