Back to Las Encinas! Netflix’s Renews Elite For an “Intense” Season 4 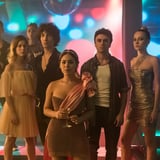 Netflix’s Elite has been renewed for season four, so more drama awaits! On May 22, costars Itzan Escamilla, Claudia Salas, Georgina Amorós, Miguel Bernardeau, Arón Piper, and Omar Ayuso confirmed the news in a video, saying that they’ve already received the script. “You better be prepared, because it’s intense,” Piper says. Amorós also teased a powerful season, saying, “I wish I could see your faces when you watch it because you’re going to flip out. There are many new things going on you could never think of.”

The announcement came only two months after the third installment dropped on the streaming platform and totally shook things up. At the end of chapter three, we see how each of the main characters go their separate ways, except for Guzman (Bernardeau), Samuel (Bernardeau), Omar (Ayuso), Ander (Piper), and Rebeca (Salas) who return to Las Encinas to repeat senior year. But with the season’s big murder mystery already solved, we can’t help but wonder: what sort of betrayal, slander, and conflict will make its way to the forefront of the upcoming episodes? Netflix hasn’t unveiled the release date, yet, but we’re waiting for it with bated breath.