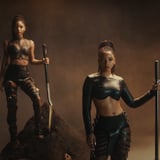 Chloe x Halle are moving on to better things in their new music video for “Forgive Me.” The clip, which coincided with the Friday release of their sophomore album Ungodly Hour, features the pair suiting up in sexy attire to croon about a waning romance. “I’ve been sittin’ here, watchin’ you go insane / I’ve been sittin’ here, watchin’ us fade away,” they sing. “Baby, don’t you see what you done threw away? / No one’s hittin’ you on the loop, on replay.” The visuals for the jam were produced by Beyoncé’s company, Parkwood Entertainment, so are we even shocked that they’re so mesmerizing? Nope, especially after seeing their Queen Bey-approved video for “Do It.”

In an interview with Apple Music, Chloe Bailey revealed the inspiration behind the track “Forgive Me”, saying, “I was going through a situation where I was dealing with a guy, and he picked someone else over me, and it really bothered me because I felt like it wasn’t done in the most honest light . . . And so when we were all in the session, this had just happened to me. I went in the booth and laid down some melodies, and some of the words came in, and then Halle went in and she sang ‘forgive me,’ and I thought that was so strong and powerful.” Watch the video above, then check out their full LP!