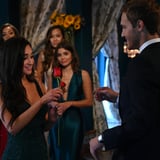 Monday’s episode of The Bachelor featured a group date in Costa Rica where a photoshoot for Cosmopolitan magazine took place. The “prize” after the contestants posed for a fashion spread in bikinis, and awarded to the woman with the most chemistry with Peter, was a digital cover shoot. Victoria F. took the prize and the photoshoot, but if you’re hoping to see the digital cover on Cosmopolitan‘s website, you’re out of luck: the cover will not be published, and it all comes down to another past shoot Victoria did that didn’t sit well with Cosmopolitan or its values.

In a letter posted on the magazine’s website, editor-in-chief Jessica Pels explains why the cover was ultimately discarded. “When it came time for me to choose the winner of the challenge – whose prize was a digital cover of Cosmo – all I knew about the contestants were their first names and the energy they conveyed through the camera lens. It wasn’t until a few weeks ago that I found out that the woman I’d chosen [Victoria Fuller] had, in her past, modeled in an ad campaign wearing White Lives Matter attire,” Pels said.

The editor’s post goes on to explain it’s been said that Victoria’s photoshoot was for “a Marlin Lives Matter organization focused on preventing white and blue marlin from being overfished, which used ‘white lives matter’ and ‘blue lives matter’ messaging on its promotional shirts and hats,” but Pels and the Cosmo staff were not convinced. “In my view, the nature of the organization is neither here nor there – both phrases and the belief systems they represent are rooted in racism and therefore problematic. Unequivocally, the White Lives Matter movement does not reflect the values of the Cosmo brand. We stand in solidarity with Black Lives Matter, and any cause that fights to end injustices for people of color,” she writes in the post.

The Cosmo team chose not to use the photos for the promised digital cover, although they had already been printed in a feature for the March print edition of the magazine, instead releasing an interview with Peter that shows some photos of Victoria, but don’t make her the center of the feature.

Related: Is the First-Impression Rose a Curse on The Bachelor? We're Investigating

This isn’t the first time that Victoria F. has been embroiled in controversy since this season premiered. During her one-on-one date, airing in last week’s episode, she revealed that she had a romantic history with the episode’s musical guest star, country singer Chase Rice. While she characterized their relationship as “dating,” called him her “ex,” and claimed he asked her not to do the show, Rice himself spoke out after the episode’s airing to clarify that they went on one date and that he didn’t particularly care one way or the other about her doing the show; he was only angry that he’d been used to promote drama rather than being able to focus on promoting his music as he’d been promised.