Courteney Cox Is Binging Friends From Season 1, So Jimmy Kimmel Gave Her a Mega Monica Test 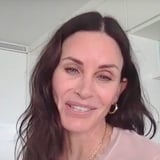 Courteney Cox might’ve spent 10 years playing Monica Geller on Friends, but she’ll be the first to admit that she doesn’t know much about the show. On Wednesday, the actress was featured on Jimmy Kimmel Live and revealed that although she’s quizzed other celebrities (like Charlie Puth) about the hit NBC sitcom, she can’t handle the hot seat. That’s why she’s chosen to spend her time in social isolation binging the show from the beginning.

“I remember loving everybody there and having fun,” Cox said. “I remember certain times in my life where I was there, but I don’t remember episodes. I fail every test!”

Well, Kimmel took this opportunity to challenge her knowledge – or lack, thereof. Cox was tasked with competing against Kimmel’s Friends-obsessed nephew, Anthony, in a competitive round of trivia. Can Cox remember Monica’s parents’ names? Or who officiated her wedding with Chandler? How about Monica’s first kiss? Spoiler: that one really took Cox by surprise. Although recent shutdowns affected Cox’s ability to film the highly anticipated Friends reunion special, at least fans will get this nostalgic walk down memory lane until the Central Perk crew reunites onscreen again. Watch the fun video above, starting at 7:48, to see Cox’s full interview with Kimmel.