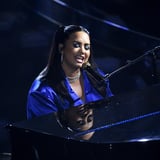 Demi Lovato has done it again, and this time, it’s in the form of a political anthem. During Wednesday night’s 2020 Billboard Music Awards, the singer unveiled an emotional new song, and it grapples with the current state of our country ahead of the election. “Commander in Chief” rips into how President Donald Trump has handled issues such as the coronavirus pandemic and racial injustice, and how Lovato herself feels about his response.

“I’m not the only one that’s been affected and resented every story you’ve spun / And I’m a lucky one, ’cause there are people worse off that have suffered enough / Haven’t they suffered enough? But you can’t get enough of shutting down systems for personal gain,” she sings. “Commander in Chief, honestly, if I did the things you do, I couldn’t sleep, seriously / Do you even know the truth? / We’re in a state of crisis, people are dying, while you line your pockets deep / Commander in Chief, how does it feel to still be able to breathe?”

The award show marks Lovato’s first performance of the new track, which she released a music video for shortly after. Earlier this month, Lovato released a single titled “Still Have Me” days after she and soap actor Max Ehrich called off their engagement. The self-love anthem spoke to the struggles of their public breakup and the events that evolved since. “Commander in Chief” has an entirely different feel to it, but it’s empowering and it’s emotional, as Lovato does best. Watch her moving performance from the Billboard Music Awards above.