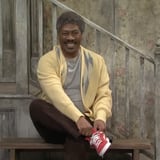 Mister Robinson’s neighborhood looks a little different in 2019. During his long-awaited return to Saturday Night Live this weekend, Eddie Murphy reprised his role as the beloved character – a parody of the legendary Mister Rogers, of course – and basically gave viewers a look at what’s been happening in the neighborhood since we last saw him. Spoiler alert: the neighborhood’s been gentrified!

In the video, Mister Robinson describes gentrification as a magic trick in which “white people pay a lot of money, and then – poof! – all the Black people are gone.” Later on, he has a run-in with two of his white neighbors who awkwardly accuse him of stealing their 72-inch television that had just been delivered that day. He runs them off and accuses them of singling him out because he’s the only Black man in the building, though as it’s revealed later, the TV and several packages that belong to other residents are sitting in his living room.

He also shared the segment’s word of the day, which was “squatter’s rights,” aka what he claims is the reason why he’s still able to survive in the neighborhood after all these years. Watch the full sketch in the video above.