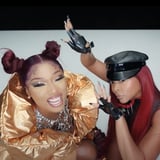 It’s our time, Hotties! On Nov. 20, Megan Thee Stallion dropped her debut album, Good News, and unveiled her music video for “Body.” In the two-minute clip, Megan and celebrities such as Taraji P. Henson, Jordyn Woods, and Blac Chyna unite for a stylishly sexy dance break as the Houston rapper celebrates her curves. “The category is body, look at the way it’s sittin'” she says. “That ratio so out of control, that waist, that ass, them titties / If I wasn’t me and I would’ve see myself, I would have bought me a drink.”

During an episode of YouTube Originals’ Released series, Megan spoke about the video’s emphasis on women empowerment. “You’re going to see all body shapes, a lot of strong women doing the damn thing,” she teased before the clip’s premiere. “Just being confident and owning their bodies and their sexuality.” Well, that’s exactly what we got, and we’re rocking with it. Watch the “Body” video above!