Everything We Know About Hulu’s Love, Victor Series – Including the Adorable Trailer 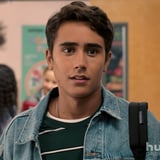 The long-awaited spinoff series of the 2018 film Love, Simon is finally here! Cheekily titled Love, Victor, the show follows Michael Cimino as Victor, a new student at Creekwood High School who, similarly to Nick Robinson’s Simon Spier (who will return as the show’s narrator), is on a journey of self-discovery.

Much like the book-to-movie adaptation, Love, Victor stars a high schooler coming to terms with his sexual identity. The titular Victor struggles with challenges at home, adjusting to a new city, and exploring his identity in a way he never has before. The trailer – released on May 26 – is the perfect introduction to the Hulu series, promising a sweet and relatable coming-of-age (and possible coming out) story. The two-minute video teases at Victor’s internal struggle while torn between the affections of Mia (Rachel Naomi Hilson), who is so perfect that bathroom graffiti wouldn’t dare besmirch her good name, and Benji (George Sear), who has a floppy mane that would put ’90s heartthrobs to shame.

Though the show made headlines for jumping streamers after moving from Disney+ to Hulu due to “adult themes,” the narrative remains the same. Viewers will follow Victor as he navigates the highs and lows of high school, understanding his sexuality, and figuring out if and how he wants to come out to the world. In addition to Cimino and Robinson, the 10-episode series also stars James Martinez, Ana Ortiz, Isabella Ferreira, and Mateo Fernandez to flesh out Victor’s colorful and complex world, from his loving family to his new friends and first crushes. Love, Victor premieres on Hulu on June 19.