Fleabag Fans, Get Ready – Phoebe Waller-Bridge’s HBO Series Is About to Be Your New Obsession 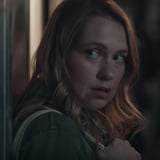 Fleabag may be over, but Phoebe Waller-Bridge‘s new comedy thriller Run might just be the show I need to get over the Hot Priest once and for all. The HBO series will star Star Wars‘s Domnhall Gleeson as Billy Johnson and Marriage Story‘s Merrett Wever as Ruby Richardson, ex college lovers who make good on a pact they’ve kept for 17 years.

After Billy texts Ruby the word “RUN,” she responds with the same message and the two meet at Grand Central Station, as promised, to board a train and travel across the country together. As their impulsive decision to drop their everyday lives sets in, Billy and Ruby reflect on who they’re leaving behind and attempt to rediscover the relationship they once had.

Waller-Bridge will co-executive produce and guest star as Laurel, a woman Billy and Ruby meet on their journey. The cast will also star Rich Sommer as Ruby’s husband, Tamara Podemski as police detective Babe Cloud, and Archie Panjabi as Fiona, Billy’s former personal assistant. See the full trailer here and watch the first episode of Run when it premieres on April 12.