For a Week, Amber Ruffin Opened Late Night With Seth Meyers With Her Police Run-In Stories 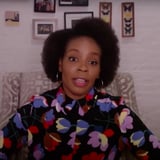 Late Night With Seth Meyers writer Amber Ruffin has “a thousand stories” of traumatic police run-ins. She’s been pulled over while listening to Busta Rhymes, called out by a cop for handing her friend his wallet, and she’s faced the barrel of a gun simply for skipping down an alley. These are just a few of her traumatic experiences, but she was willing to share them publicly for a full week on the NBC show as its opening segment.

“The cops have pulled a gun on me, the cops have followed me to my own home,” she explained. “And every Black person I know has a few stories like that. Many have more than a few. Black people leave the house every day knowing that, at any time, we could get murdered by the police.”

Her stories are heartbreaking, but unfortunately, they are not unique. As protests across the country continue to honor George Floyd, Breonna Taylor, Ahmaud Arbery, and countless others killed as a result of police brutality, it is imperative to remember the aggression Black people face on a daily basis.

Amber closed her last segment of the week by honoring those who’ve died during the nationwide demonstrations by name. “Don’t let it cost more lives,” she said. “Vote, call your representatives, unfriend racists, and most importantly, when you see something, say something, do something, get loud. Don’t let people get away with racist crap, not anymore. It’s a new day.” Listen and learn from her experiences by watching the full video above.