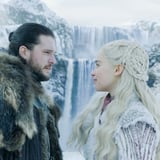 For any Daenerys Targaryen stans still reeling over that controversial Game of Thrones series finale, it looks like the Mother of Dragons’ fate was foreshadowed long before Jon Snow showed up with a knife. In an interview with TV Guide, Emmy-winning costume designer Michele Clapton revealed that Daenerys’s white fur coat in the season eight premiere was a huge hint at her transformation into the Mad Queen. More than a few Reddit users caught onto the significance of Daenerys’s wardrobe while the series was still on air, and we should have known our Khaleesi was going to lose control all along.

“When she arrives and descends on this dragon, she is this sort of angel of mercy.”

“Initially it was about the idea that if she’s riding a dragon to the North, she should be warm,” Clapton said. “And then I decided that actually it’s the first time she’s performed a completely selfless task – because it’s usually for her own gain – and on this occasion, it was actually for her love. So, I loved this idea, as I developed this costume, that it’s almost [as if] she sees herself as this savior, this angel. And so when she arrives and descends on this dragon, she is this sort of angel of mercy. I think it just said so much about her mental state at the time, how she saw herself.”

Kit Harington on Game of Thrones Backlash: “We Knew That It Was Right For the Characters”

Clapton wanted the white fabric of Daenerys’s coat to represent purity, while also calling attention to her coldness. It’s through the coat that we see Daenerys’s parallels to the White Walkers and better understand how she perceives herself as a savior, not just to Jon, but to all of Westeros. See Clapton’s full video ahead to hear more about Daenerys’ coat and to see original sketches of the symbolic design.