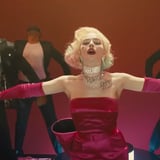 Harley Quinn is back, and she’s bringing some new friends along for the ride! The official trailer for Birds of Prey (and the Fantabulous Emancipation of One Harley Quinn) is here and we’re finally getting a proper look at our badass quartet featuring Margot Robbie’s Harley Quinn, Mary Elizabeth Winstead’s Huntress, Jurnee Smollett-Bell’s Black Canary, and Rosie Perez’s Renee Montoya. Spoiler alert: they’re amazing!

The film follows Harley after her misadventures with the Joker and the Suicide Squad, and her introduction to several iconic DC characters, incluidng the movie’s big baddies, the sinister Black Mask (Ewan McGregor) and Victor Zsasz (Chris Messina). Despite their wild differences, the four women team up to protect a young Cassandra Cain (Ella Jay Basco) – who eventually dons the mantle of Batgirl in the comics – and kick some major ass! From the looks of the trailer, we’ll be seeing lots of dazzling costumes, musical numbers (into this!) and of course, Harley’s precious hyenas from the comics!

Check out the colorful trailer above, as well as the other sneak peeks we’ve gotten before, and look out for Harley and the gang when the film drops on Feb. 7.

Are You Ready to Face the Mayhem? Birds of Prey Set to Premiere February 2020