How Schitt’s Creek Became a Rare TV Unicorn: A Comedy That Got Better With Time 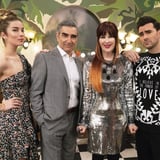 Schitt’s Creek, the final season of which just snagged a whopping 15 Emmy nominations, bucked this trend as it did many others: it actually got better with age. What started out as a silly, sometimes mean sitcom turned into a creative masterpiece and a cultural icon – and it did so by embracing the things too much modern comedy won’t.

Ask any Schitt’s Creek fan about starting the show for the first time, and you’ll probably get the same caveat from all of us: stick it out through the first season, it gets better. At its inception, the show seemed to struggle with a few things, particularly its tone and its unlikeable characters. It felt like an Arrested Development knockoff, full of unlikeable rich characters getting taken down several pegs. Cringe comedy – both from the Rose family suffering indignity after indignity and from the crassness of townies like Roland Schitt – permeates much of the early episodes, and it’s hard to distinguish the show from dozens of other “let’s laugh at awful people” comedies of the same era.

But even in those frustrating episodes, the seeds of what would make Schitt’s Creek a phenomenon were there. The Roses aren’t mean, they’re just foolish, and that helps a lot. There are hints that their unpleasant traits – Moira’s outrageous delusions of grandeur, David’s prickly self-involvement, Alexis’s shallow pursuits – are the result of something painful, hiding softer cores beneath their (well-dressed) exteriors.

“Underneath the wigs and the one-liners and the running gags is the big, warm heart of a show that lets us live in a world where kindness and compassion win out.”

By the second season, though, the show seems to settle slowly into the tone that turned it into a hit. The Roses’ hard edges softened a little and their hearts slowly began opening up. The dialogue remained as sharp as ever, but the humor became more about the absurdity of delightful character moments (all together now: “fold in the cheese!“). It happened in tiny moments like Alexis asking David for a hug or Moira being humbled by the Jazzagals’ talent, but it all led up to the pivot point: the season two finale.

In this episode, Johnny and Moira run into a couple from their old life and wind up having dinner with their old friends, plus Roland and Jocelyn. Their old friends are so much like they were when we first met them, which is why it’s so cheer-worthy when the Roses stand up for their new friends and their new hometown. The episode ends with the Roses and the Schitts joining their children at a barn party, where they dance under strings of lights and even say “I love you” out loud. It’s the moment that Schitt’s Creek found the warmth to offset the sharp-tongued comedy, and it’s the moment the show as we know it was born.

In season three, you could tell that the show was taking the time to let its characters breathe and grow naturally, and it was those choices that kept it afloat and provided endless fodder for the talented team. If you want to know what really elevated Schitt’s Creek, you can look to the two major storylines of that season: Johnny and Stevie taking over the motel, and Patrick arriving as David’s new love interest. The motel storyline breathed new life into Stevie’s plot, gave Johnny a real purpose after two-plus years of aimlessness, and, most importantly of all, allowed Stevie to slowly be folded (like cheese) into the extended Rose family.

As for Patrick and David, well, I don’t think anyone expected Ray’s deadpan, snarky colleague who needled David about his business application would end up sparking one of modern TV’s most beloved couples. Series creator and star Dan Levy famously said in a 2018 panel that he deliberately made Schitt’s Creek a world without homophobia or other hateful ideologies. “I have no patience for homophobia . . . We show love and tolerance. If you put something like that out of the equation, you’re saying that doesn’t exist and shouldn’t exist.” In the place of the usual drama and angst, we got to watch a loving gay couple whose lack of melodrama didn’t mean a lack of messiness, awkwardness, or hilarity.

And that, right there, writ large, is the secret to Schitt’s Creek‘s success: its incredible understanding of how simply being human can be ridiculously funny, and how having a huge heart doesn’t have to mean being naive and Pollyanna-ish. Too much of contemporary comedy takes a darker tone, laughing at how terrible its characters and situations are, but Schitt’s Creek‘s greatness comes from doing the exact opposite, and taking the time to let its characters feel like real people instead of joke machines. Underneath the wigs and the one-liners and the running gags is the big, warm heart of a show that lets us live in a world where kindness and compassion win out. More importantly, it gives us hope that maybe, with a little work (and some fabulous fashion), we could make our own world a little more like the Creek.