How True to Life Is the Trial of the Chicago 7 Script? For Yahya Abdul-Mateen II, Very 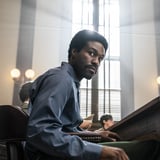 Even though The Trial of the Chicago 7 is based on true events, the new legal drama is invariably imbued with Aaron Sorkin’s grand swells and penchant for the perfect line at the perfect time. The director and screenwriter didn’t, however, have to do much embellishing with his depiction of Bobby Seale. In a recent appearance on The Late Show With Stephen Colbert, Yahya Abdul-Mateen II, who portrayed the Black Panther Party cofounder, said his lines were the most true to the original court transcripts.

“It fits directly into Aaron’s words because Bobby is a wordsmith.”

“The words that I speak in the film come directly from the trial,” Abdul-Mateen said. “Aaron was able to pull directly from the transcripts of the trial, which I thought was so fitting. It fits directly into Aaron’s words because Bobby is a wordsmith. He loves to speak. When I studied him, I saw that he was extremely charismatic – loves to hear his voice. Extremely passionate, and speaks fast at a clip rate sometimes. It felt like a really, really good partnership. I’m so, so excited that I was the one chosen to be in those shoes.”

Though the actor was already familiar with Seale’s activism and impact, in his portrayal, Abdul-Mateen did learn more about Seale’s participation in the trial. “After learning about the history and his treatment in the trial, he became a figure who I really knew I had an opportunity to stand up for and to be an advocate for,” Abdul-Mateen said. “He was such an honorable person, who carried himself with such dignity and class.” Watch the interview above.