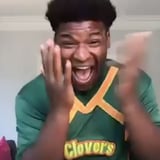 Gabrielle Union and Jerry Harris just blessed us with one of the best Zoom interactions of 2020 – quite possibly even better than all of those nostalgic movie cast reunions combined. After sharing a handful of sweet Twitter exchanges and mutually stanning one another earlier this year, the Bring It On actress and Cheer superstar virtually met during Variety‘s Power of Young Hollywood event Thursday night – much to the surprise of Jerry. The mat-talk king was in the middle of performing the Clovers’ famous “Brr, It’s Cold in Here” routine at home when Isis herself crashed the livestream.

“You brought it, baby!” Gabrielle exclaimed while appearing onscreen, resulting in the purest, most heartwarming reaction from Jerry. He remained in total shock as Gabrielle offered some encouraging mat talk and doled out well-deserved praise for his positive vibes. “You are the most wonderful person I’ve seen through my television in so long,” she said. “When I started watching Cheer – because of course, I was like day one, binged the whole season – you spoke to me. Your positivity, your journey. I cried every time you appeared. I’m obsessed.” Join the club, Gab!

The actress added, “We’re gonna have to work together,” which elicited quite the eager “Absolutely!” from Jerry, naturally. Imagine these two teaming up to recreate cheers from Bring It On – we’re doing spirit fingers just thinking about it! Watch Jerry and Gabrielle’s entire conversation above to hear the wise advice Gabrielle gave the Cheer icon.