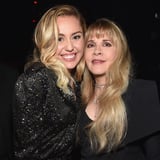 Miley Cyrus has been truly smashing it with her recent mix of cover performances and single releases, and her latest drop is basically the cherry on top of it all. In an unexpected treat ahead of the debut of her upcoming album Plastic Hearts, Cyrus released a remix of “Midnight Sky” featuring musical icon Stevie Nicks! The Fleetwood Mac vocalist joined the 27-year-old singer for the smoky-voiced remix titled “Edge of Midnight,” which is a clever name to reference the song’s mashup of “Midnight Sky” and Nicks’s 1981 hit “Edge of Seventeen.” The latter appeared on Nicks’s first solo album Bella Donna and was originally sampled in “Midnight Sky” in a more subtle homage.

“@StevieNicks has always been my idol & an inspiration. It’s an honor to now call her my friend and collaborator,” Cyrus wrote for the song’s debut on Instagram. Nicks shared a similar sentiment on her page, writing that collaborating with Cyrus was “Magical!” and that she “loved singing with her!” Don’t we love it when legends work together?!

“Edge of Midnight” will appear on Plastic Hearts when it drops on Nov. 27, along with the original track and Cyrus’s (iconic) covers of Blondie’s “Heart of Glass” and The Cranberries’ “Zombie.” Neither singer has said a word about a music video for the single, and I know we’re in a pandemic, but surely we can make something work? I’ll even take a Zoom collab at this point!

And if you have the nagging feeling that you’ve heard Waddy Wachtel’s unmistakable 16th-note guitar riff from the beginning of the song, your memory is not deceiving you! “Bootylicious” by Destiny’s Child also samples the riff, as well as Nicks in the music video. Talk about iconic songs!