Brad Pitt is getting into the holiday spirit! The actor is expected to celebrate Christmas Eve with some of his kids without a monitor, a source exclusively reveals in the new issue of Us Weekly.

“Brad’s planning on having the younger kids on Christmas Eve,” the source tells Us about Shiloh, 13, and twins Knox and Vivienne, 11, noting that this will be the first Christmas since his divorce with Angelina Jolie in which a monitor won’t be present at Pitt’s house. (The actress filed for divorce in 2016 after two years of marriage and 10 years together.)

Brad Pitt and Angelina Jolie: The Way They Were

While his daughter, Zahara, 14, was present last year, the Ad Astra star, 55, is “not expecting her this year,” says the source. And certainly not son Maddox, 18, and Pax, 16, either as Pitt is not on good terms with them.

In the meantime, the producer can at least take comfort in being with his youngest kids to celebrate the holiday. “He’s hoping they’ll want to spend the night,” says the source, “but he’s really just looking forward to Christmas Eve with them.”

Before Pitt and Jolie reached a custody agreement in December 2018, the former was monitored by officials from the Department of Children and Family Services while with his kids. After coming to an arrangement, the supervised visits came to a conclusion with the exception of overnight visits.

The Fight Club actor also got to spend Christmas last year with Zahara, Shiloh, Konx and Vivienne, which was also supervised. “Brad exchanged Christmas gifts with the kids on December 25 at his house,” a source told Us at the time. “[He] has never spoiled the kids for their birthdays or holidays. It wasn’t over the top but low-key.” 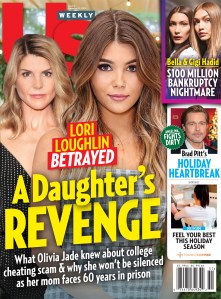 For more on Pitt’s holiday plans, watch the video above and pick up the new issue of Us Weekly, on newsstands now.