Is Ammonite Based on a True Story? Well, Kind Of 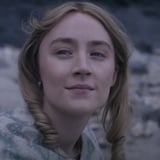 One watch through director Francis Lee’s trailer for Ammonite, and you know that you’re in for a steamy period drama between Saoirse Ronan and Kate Winslet. Winslet’s character, paleontologist Mary Anning, works on the English coastline at Lyme Regis and barely gets by selling fossils to tourists. She reluctantly takes Charlotte Murchison (Ronan) under her wing along her excavations as Murchison recovers from a personal tragedy. As the women spend time together, it’s clear that there’s sexual and romantic tension between them. But is Ammonite based on a true story? Well, kind of. There really was a paleontologist named Mary Anning as well as a geologist named Charlotte Murchison. But you can look under every rock and you’d be hard-pressed to find any romantic connection between the two.

Much has been written about Anning, but we actually know very little about her personal life. Born in 1799, she came from a family of fossil hunters in the southern shores of Great Britain in Lyme Regis, which is known for its fossils from the Jurassic period. Anning lived in poverty for most of her life, but she maintained a living by collecting fossils, which she learned from her father. Today, she’s credited with discovering the first ichthyosaurus fossil known to the London science community when she was between 10 to 12 years old. Her other important finds included the first complete plesiosaurus skeleton in 1823 and the first pterodactyl outside of Germany in 1828. Her work also pioneered the field of coprolite – or fossilized poop. Most of Anning’s finds ended up in museums and collections without credit due to her lack of formal training as well as her gender and social class. The Geological Society of London, in fact, refused to admit women until 1904.

While we’re privy to Anning’s finds today, we don’t know much about her relationships. Anning died in 1847 from breast cancer, 47 at the time of her death. She never married or had children. While Anning and Murchison were friends, there’s no indication that they ever had a romantic affair. We do know that Murchison’s husband brought Murchison along his travels and that she sketched and hunted fossils with Anning in Lyme Regis.

Lee, who directed Ammonite, has defended his decision to make Anning’s story queer, as the film’s premise drew controversy. “As a working class, queer film maker, I continually explore the themes of class, gender, sexuality within my work, treating my truthful characters with utter respect and I hope giving them authentic respectful lives and relationships they deserve,” Lee tweeted in 2019.

You may have a bone to pick with Ammonite if you’re looking for a 100% historically accurate biopic. But it may just be your rock if you’re intrigued by a hot-and-bothered story about Victorian-era fossil hunters.