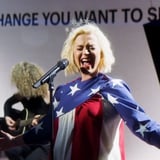 We are live kicking off Rock the Vote’s Democracy Summer with our hosts Rosario Dawson and Logan Browning + performances by Katy Perry, Black Eyed Peas, Big Freedia, MAX, Amara La Negra, and Leslie Grace! This is our time to rise up and take our voices to the next level. We are leading the way in the streets and to the ballot box to create the change we want to see. Join us and our partners with special guests Little Miss Flint, Chuck D, Eve, Ne-Yo, Sen. Elizabeth Warren, Dove Cameron, Sen. Julian Castro, Skylar Astin, Sec. Julian Castro, Rich Brian, Sunny Red Bear and more to launch a summer of organizing. During the livestream, funds will be raised for Black-led organizations Community Justice Action Fund and National Action Network doing amazing work on the ground! Join us for this summer of justice and democracy. This is our movement to the polls. #RockTheVote #DemocracySummer2020

Four million young people will be able to vote for the first time this year – and during nonprofit Rock the Vote‘s Democracy Summer 2020 concert on June 18, this fact was repeated by many of the speakers and artists in the lineup. The organization used this virtual event to kick off its crucial call to action: vote this November. Among those to attend was Katy Perry, who, while donning an American flag dress and star headband, graced us with a performance.

With “vote the change you want to see” written on the screen behind her, Perry sang her latest hit, “Daises,” in addition to “Roar” and “Chained to the Rhythm.” These songs each seem extremely important and rather purposeful in their placement. “Daises” and “Roar” preach self-empowerment and are about rising from adversity to find strength. “Chained to the Rhythm” quite literally says, “So comfortable, we’re livin’ in a bubble, bubble. So comfortable, we cannot see the trouble, trouble.” Though it was released in 2017, the lyrics should be an indication that now is your time to wake up and use your vote to combat the trouble you see in this country.

As Senator Cory Booker said in his video after Perry’s performance, “Whether it is dealing with justice in policing; dealing with true ideals of public safety, which are not about law enforcement, it’s about investing in people, investing in mental healthcare, investing in drug addiction, investing in education . . . all of these things are on the ballot. This is, indeed, the most important election of our lifetime.”

You can find the full live stream above. Perry comes on at the two-hour-and-15-minute mark, but if you watch the whole virtual concert, hosted by actors Rosario Dawson and Logan Browning, you’ll also see a moving poem from 16-year-old Nyarae Francis; appearances by Saweetie, Dove Cameron, and The Black Eyed Peas; and speeches from activists fighting for racial justice.