Keke Palmer Asks National Guard to Join Protesters: “March Beside Us, Protect Us!” 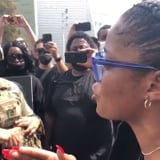 Watch all of this. pic.twitter.com/YHq0QhXrnw

Like many Americans, Keke Palmer is marching with protesters fighting against racial injustice. On Tuesday afternoon, the actress bravely spoke to National Guard soldiers in an inspiring conversation. In a powerful video captured by Gadi Schwartz of NBC News, Keke stood between protesters and the National Guard troops to ask the soldiers to help protect their community and march with them.

“We have people in here that need your help, this is when you and ya’ll stand together with the community, with society,” she said in the video. “So stop the governmental oppression, period. We need you.” When one soldier said, “I agree with you,” in response, Keke then asked the troops to march with the group of protesters. “March with us, march beside us!” she said, leading the crowd to chant and cheer. “Let the revolution be televised, show us that you’re here for us . . . Make history with us, please!”

Lizzo Wrote a Song Urging People to Vote, Because "There Are Many Ways to Protest"

A soldier then explained that while they couldn’t leave their post, they could march through the street to the next intersection with the group. Though the actress continued to plead, he said he also had to protect businesses, to which she responded, “I’m at a loss.” A protester in the crowd then asked if the soldiers could take a kneel instead, and the National Guard members got down on their knees altogether in solidarity. “That ain’t enough for me,” Keke said, continuing to urge the soldiers to march with the protesters. While the soldiers declined to march with the community, Keke’s passionate speech is still a must watch. Check out the full video above.