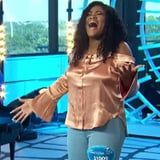 Of the thousands of people who try out for American Idol every year, few nail their audition the first time around, but that’s exactly what 17-year-old Cyniah Elise Chambers did with her cover of Calum Scott’s “You Are the Reason.” Apart from wowing the judges with her sense of style, Chambers, who is from Atlanta, also wowed them with her talent, putting her own passionate and soulful spin on the heartbreaking song.

“You remind me very much of watching the phenomenon of Whitney [Houston] when she first came out,” Lionel Richie told Chambers. “You just have such control and mastery of your voice; it was almost effortless.” Katy Perry went on to compliment Chambers’s stunning vocal range before the judges took a final vote. “I voted as soon as she opened her mouth,” Richie added.

Chambers previously went viral on Facebook with a video in her family’s living room that showed her singing “Change Me” by Tamela Mann and showcasing a vocal range worthy of a ticket to Hollywood. The original Facebook video has since received over four million views, according to Chambers, and I have a feeling she’s going to have even more fans after her stunning audition. Watch Chambers’s full performance above.