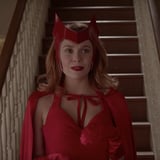 We’re not sure what we were expecting from Marvel’s upcoming Disney+ plus series WandaVision, but the first look is already blowing our expectations away. During the streaming service’s Super Bowl spot, fans were treated to sneak peeks at three of Marvel’s upcoming TV series, and WandaVision‘s footage is a sight to see.

The MCU series stars Elizabeth Olsen and Paul Bettany reprising their roles as Wanda Maximoff and Vision, and “blends the style of classic sitcoms with the Marvel Cinematic Universe.” In the teaser, Vision – who fans will remember died in Avengers: Infinity War and didn’t return in Avengers: Endgame – welcomes Wanda home, but things are decidedly off as she is the only thing in full color. The rest of the footage shows both Wanda and Vision looking like characters from the entire Nick at Nite lineup while teasing that there’s something more happening beneath the surface. After all, Vision is dead, so how exactly is all this taking place?

WandaVision also stars Kat Dennings (Dollface) and Randall Park (Fresh Off the Boat) reprising their roles as Darcy Lewis and Agent Jimmy Woo, as well as Kathryn Hahn (Transparent) and Teyonah Parris (Survivor’s Remorse) playing a “nosy neighbor” and a grown-up Monica Rambeau (who was first introduced as a kid in Captain Marvel).

Check out WandaVision‘s brief feature in the teaser above and get ready to dive into the madness when the series premieres this Fall.

All the Marvel Shows Set to Premiere on Disney's New Streaming Site, Disney+