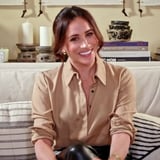 We never thought we’d see a royal on America’s Got Talent, but it happened. On Wednesday, Meghan Markle, aka the Duchess of Sussex, made a surprise virtual appearance on the show’s finale to send one of the finalists, Archie Williams, a sweet message of support.

“Just wanted to let you know that we’ve been so moved by your story and we’ve been cheering you on every week and it’s not just because we’re partial to the name,” Markle said, referring to the fact that Williams and her 1-year-old son share the same name. “So, a very special message to you that I’ll probably be saying all of my life, but on this night it’s specifically for you: Archie, we are proud of you and are rooting for you, we can’t wait to see what you do.”

Prince Harry and Meghan Markle Just Inked a Major Deal With Netflix, and We're Ready to Tune In

Earlier this year, Williams revealed in his audition that he spent 37 years in prison for crimes he didn’t commit. “I knew I was innocent, I didn’t commit a crime,” Williams explained after he was wrongly convicted of aggravated rape and attempted murder. “But being a poor Black kid, I didn’t have the economic ability to fight the state of Louisiana. Days turned into weeks, into months, into years and into decades. It’s like a nightmare.” Watch Markle’s heartfelt message for Williams above now.