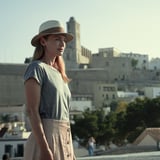 If part four of Netflix’s Spanish-drama La Casa de Papel (Money Heist) has left you hungering for another thrilling murder mystery, the streamer has you covered. The mastermind behind Money Heist, Álex Pina, has teamed up with the producers of The Crown to bring a new series full of drugs, music, sex, and of course, murder.

White Lines follows Zoe Walker, a young woman who leaves behind her quiet life when the body of her brother is discovered two decades after his mysterious disappearance from Ibiza. She returns to the Spanish island paradise, virtually a stranger, and her investigation leads her down a decadent and dangerous path. Caught in the world of dance clubs, lies, and cover-ups, Zoe is forced to confront the darker side of her character as she struggles to learn who to trust and how to survive. There’s a thin line between the dream and a nightmare and Zoe’s dangerously close to finding it.

Money Heist May Not Be a True Story, but It Definitely Has Some Real-Life Inspiration

Whew, I got shivers just writing that! White Lines features more than a few familiar faces, including Laura Haddock as Zoe, Tom Rhys Harries as Axel Collins, Marta Milans as Kika Calafat, Juan Diego Botto as Oriol Calafat, Pedro Casablanc as Andreu Calafat, Belen Lopez as Conchita Calafat, Daniel Mays as Marcus, and Angela Griffin as Anna. The 10-episode series is set in both Manchester and the Balearic Islands, as well as across two different periods in time – the ’90s and the current decade – which means viewers are in for a lot of color and waves of nostalgia.

Watch the trailer above and check out some photos from the series before White Lines premieres on Netflix on May 15.