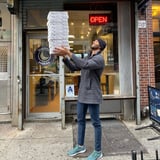 Thanks to his friendship with Bachelorette fave Tyler Cameron, we already know a lot about The Bachelor‘s next lead, Matt James – including his work with ABC Food Tours, a nonprofit he and Tyler have run for years. The program introduces kids from lower-income communities to different kinds of food and healthy-living activities – here’s what you should know about the work they do.

The inspiration for the project came when the two were football teammates at Wake Forest University in Winston-Salem, NC. “One of the cool things our athletic department did was invite students from the community on campus to eat with the athletes,” Matt told People in a 2019 interview. “Winston-Salem has a very large wealth divide and a lot of those students are underserved and under-recognized, and it was just this organic interaction that wasn’t supervised like, ‘Alright, you’re going to meet with Johnny for 30 minutes and go over homework.'”

After their college (and sports) years ended, they stayed friends, and an encounter with a group of lower-income elementary school students in New York one night inspired them to start up a community program. On the ABC Food Tours website, a page called “Our Story” lays it out in detail:

“Late one night when Matt was leaving his favorite Lower East Side eatery, he encountered a group of young kid’s clustered on the corner of 6th Street and Avenue C. After being teased in passing about how ashy his ankles were, he paused and engaged the party. He learned that they attended a local elementary school and lived in the neighborhood. After sharing a few more laughs, Matt parted ways with the young boys with an idea. In reaching out to their elementary school, a meeting was set with the Principal of P.S. 188 – Mrs. Ramos. Mrs. Ramos explained to him that over 50% of the students at her school were homeless. That along with numerous other hardships gave Matt an idea, ABC Food Tours.

The initial goal was to find a creative way to engage kids in underserved communities. We started out taking groups of students to our favorite restaurants in lower Manhattan. As former athletes, we saw the importance of introducing not only physical but mental wellness components into our tours. One year later; we now service all of District 1, include a fitness component in every tour, and have plans of expanding into Brooklyn, surrounding neighborhoods in Manhattan and select cities across the country.”

The program serves families in the New York City metro area, taking kids on mini tours to stop at different restaurants, sample foods that the kids have maybe never tried before, and learn more about healthy eating and cooking. Matt admits that the costs can climb sometimes, but they never ask for any fees from the participants or their families. Instead, they fund it through donations, fundraisers, and their own wallets.

“We love eating at these places and we know how difficult it is to stay afloat, so we never ask for anything,” Matt said in 2019. “For the most part we pay for everything, and a lot of it is funded by the donations that people give on our website and then independently by Tyler and myself. So we’ll put together events, like Tyler had an event at Soul Cycle where people sponsored tours and they got to ride with us at one of the studios.”

Matt’s commitment to doing good is just one of the many reasons fans are so excited to see him take the spotlight as the next Bachelor when production resumes in the (hopefully) near future.