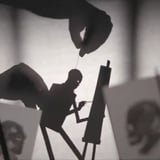 A new trailer for Nia DaCosta’s Candyman is out and it’s guaranteed to send shivers down your spine. The video, released on June 17, uses shadow puppets to tell well-known stories of Black men and their murders, including the original Candyman himself. “Candyman, at the intersection of white violence and black pain, is about unwilling martyrs,” DaCosta wrote in a tweet accompanying the new trailer. “The people they were, the symbols we turn them into, the monsters we are told they must have been.”

Two of the vignettes play out the real-life lynching of James Byrd, Jr. in 1998 and the execution of 14-year-old George Stinney, Jr. in 1944. Another depicts the story of the Candyman as told in the 1992 supernatural horror film, inspired by characters from Clive Barker’s 1985 short story, The Forbidden. A Black artist who was hired to paint a portrait of a wealthy white man’s daughter, Daniel Robitaille was lynched when it was discovered that he had fallen in love with her. A mob cut off his hand, replaced it with a hook, and spread honey on him so bees would sting him as he was burned alive.

The Candyman Might Be Based on a Short Story, but It Has Some Roots in Reality

All the vignettes are tied together by a painter who is shown creating portraits of Black people after they’ve been murdered, and we see him surrounded by the paintings of both fictional and real victims of white violence. This figure is most likely a reference for Watchmen‘s Yahya Abdul-Mateen II, who plays artist Anthony McCoy in the upcoming “spiritual” sequel to the first Candyman. Written by Peele and Win Rosenfeld, the movie returns to the original’s now-gentrified neighborhood as Anthony and his girlfriend Brianna Cartwright (Marvel’s Teyonah Parris) move in years after the events of the first film. Though his partner isn’t a fan of the grisly urban legend of Candyman, Anthony is obviously into the killer’s tall tale – which inevitably leads to him daring someone else to utter the cursed name five times.

From the looks of the previously released trailer, this all leads to Candyman choosing Anthony to carry on his bloody legacy, and he’s not letting anyone get in the way of his successor. If you’re even a tad squeamish, this is not the horror flick for you. The cast features plenty of familiar faces including Misfits‘ Nathan Stewart-Jarrett, Selma‘s Colman Domingo, and the original Candyman himself, Tony Todd. Watch the eerie live-action trailer ahead. and get ready to get spooked when Candyman slinks into theaters on September 25.