Not to Yuck Your Yum, but The Kissing Booth’s Elle and Noah Are Far From Relationship Goals 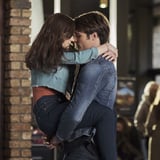 Most of the time, the point of a romantic comedy is to make you fall in love with the protagonist and their chosen partner. If you don’t feel connected to their love story, how on Earth are you going to enjoy the film?! When it comes to the Kissing Booth franchise, both films manage to make me like everything but the love story between its main characters, Elle (Joey King) and Noah (Jacob Elordi). Despite the kooky kids being brought together by a classic combination of rom-com tropes, the first film’s setup of Noah’s character made it almost impossible for me to buy the idea of him being the right one for Elle. And the newly released The Kissing Booth 2 made me realize Elle isn’t right for him, either!

Before your “NoElle” senses get completely offended by the idea that these two aren’t meant to be, hear me out. In the first film, no one directly accuses Noah of wrongdoing, but they all allude to his bad temper, and he’s shown to resort to physical violence often enough to have a reputation. I’m sure this serves to give him an edge in the book and make him seem just the right amount of dangerous to be enticing to the pure goodness that is Elle, but when we see it in live-action it’s a lot more intimidating. It doesn’t help that we continuously watch Noah lose his temper – or seem on the verge of it. Lee’s (Joel Courtney) assumption that his brother has physically hurt Elle after he notices a bruise on her face is the final nail in Noah’s coffin. Everyone but Elle seems to be concerned about Noah’s temperament, and while it may seem romantic that she “sees another side to him,” in reality that’s an excuse for ignoring some big red flags. At the very least, Noah could explain that he’s seeing someone for his anger issues!

6 Unfiltered Thoughts on The Kissing Booth 2’s Romances, Friendships, and Everything in Between

Way to make your boyfriend feel like a scumbag for your insecurities, Elle!

Elle ignores all the red flags pointing toward Noah’s temper, and the two are officially together by the end of the first film. In the sequel, Noah is away at Harvard and Elle decides she’s going to try and be a mature girlfriend by ignoring practically all of his calls and text messages and sporadically answering back monosyllabically. This is the first sign that Elle is terrible at this dating business; she doesn’t even tell Noah that she’s trying to give him space, she just stops communicating with him! She continues similarly for the rest of the film. She never truly talks to Noah about any of her feelings or worries regarding their relationship, seemingly expecting him to read her mind. And when she does confront him about her suspicions, she tells him that she began to suspect him because of his “past.” Noah tells Elle that isn’t fair and he’s absolutely right. Elle went into their relationship accepting whatever had happened in Noah’s past and it’s foul for her to use it as justification for her distrust. Way to make your boyfriend feel like a scumbag for your insecurities, Elle!

Elle ends up cheating on Noah with Marco (Taylor Zakhar Perez) – who deserved so much better than to be caught up in their drama, sorry to this man – with a kiss on stage during their Dance Dance Revolution competition. And then, rather than acknowledging that she made a mistake and deserves his ire, Elle lashes out at Noah’s obvious attempt to make her jealous by inviting his friend Chloe (Maisie Richardson-Sellers) to Thanksgiving dinner. No one is right in this situation because Noah could have used the moment to clear the air, but since Elle is the cheater here, she’s even more in the wrong than everyone else.

Elle and Noah eventually make up, with her apologizing to Marco and admitting that even though she felt something between the two of them, he isn’t “the one.” But let’s be real, that’s too clean an ending for everything that went down! Throughout the film, neither Elle nor Noah feels comfortable enough to have a serious discussion with one another about their feelings or their situation; Noah can’t talk to her about feeling out of his depth at school or why he got so close to Chloe, and Elle can’t trust him. At the core of it all, Elle is quick to believe that Noah is cheating because she believes he’s capable of doing that to her – which is not a stable foundation for a relationship at all.

The Kissing Booth 2 Soundtrack, aka Your New Summer Playlist, Is Officially Here

Of course, this is a film where everyone makes terribly stupid mistakes and never talks to each other about anything because then the film would be over too quickly, but in this case, there’s no need for it! Elle has enough distractions with the Lee/Rachel drama and Marco being too handsome for his own good. The fact that she thinks her boyfriend is a cheater and ends up cheating on him instead is just icing on the top of the “Team Noah and Elle just need to go their separate ways” cake.