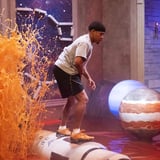 Floor Is Lava is one of the best new shows added to Netflix in 2020. And by best, we mean most ridiculous. The competition show, inspired by an age-old game played by kids in their living rooms, has groups of three make their way through themed obstacles courses surrounded entirely by treacherous lava – or, you know, some sort of mystery goo. Nearly a month after the show’s arrival, Netflix shared a fascinating video detailing how the show and its sets came together.

For starters, a production village and test space was set up in a former Ikea. Then, over the course of six weeks, the various sets were built by a construction team, with each and every prop being built from scratch, hand-painted, and tested for safety. Certain parts of the course were also set up in a pool in the parking lot, where stunt people of varying skills and physical abilities would give them a shot.

As for the lava, the production team got help from the chemistry lab responsible for a lot of the slime shown in Alien or Ghostbusters. A special effects team also rigged various contraptions to make the lava bubble up during inopportune times for contestants. As a result, nearly 2,000 towels were used a day to clean up the edges of the set. Our favorite tidbit, however, might be the fact that contestants initially thought they were applying for a show called Devil’s Run. (That’s probably coming to Netflix in 2021, right?) Watch the video above to learn more Floor Is Lava production secrets.