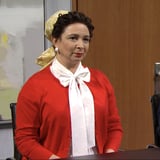 We all know that the COVID-19 pandemic has hit pockets pretty badly, but has anyone bothered to think about the iconic good mascots? Saturday Night Live did, and pulled off what could be their funniest sketch of the night! During the highly-anticipated post-election episode, Maya Rudolph, Kenan Thompson, and Dave Chappelle showed viewers how things would have went down if Aunt Jemima, Uncle Ben, and the Allstate Guy had to defend their jobs in real-life.

The brands of the first two characters underwent massive brand changes earlier this year after years of criticism for their racist, stereotypical imagery. But, as Chappelle’s “Guy From Waiting to Exhale” (otherwise known as Dennis Haysbert) points out, he’s a real person, unlike Aunt Jemima and Uncle Ben. And his voice is really damn soothing, we don’t want to miss out on that! Somehow, the discussion digressing to the fullness of Pete Davidson. Yes, we meet the comedian, not Count Chocula, who he was playing in the sketch. It’s no surprise that practically everyone in the skit almost burst into laughter more than once! Watch the sketch above.