Prince William and Prince Harry still have much mending to do in their relationship, a royal insider exclusively reveals in the new issue of Us Weekly.

Things are “not great” for the brothers at the moment, says the insider. “They both need to put in the effort to rebuild their relationship.”

Prince William and Prince Harry’s Cutest Moments Through the Years

While William and Harry have always had polar opposite personalities, the differences have only recently been causing their rift. “There’s always been a part of Harry that felt like he was living in his brother’s shadow,” notes the insider. “He doesn’t envy the responsibility that comes with being the future king of England, but William’s the ‘golden boy’ and Harry feels like he has a lot to live up to.”

In October, the Duke of Sussex, 35, finally confirmed that he and his older brother had a bit of a falling out in the documentary, Harry & Meghan: An African Journey.

Now the Duke of Cambridge, 37, is concerned for Harry as well as his wife, Duchess Meghan — especially after the couple also opened up in the doc about the stress of the constant unwanted attention they receive. 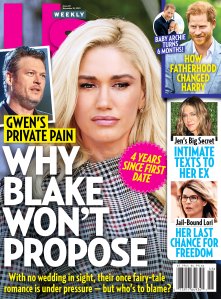 Prince Harry and Duchess Meghan: A Timeline of Their Relationship

“Even though the brothers have grown apart, William still cares about Harry and is hoping that he’ll open up to him about his current struggles,” a source told Us in October. “William wants to be there for Harry and hates seeing him in such a bad place.”

For more on William and Harry’s brotherly discord — and inside Harry’s life as dad to Archie — watch the video above and pick up the new issue of Us Weekly, on newsstands now.

With reporting by Natalie Posner