Rebel Wilson’s New Show Puts 10 Australian Comedians in a House, So What Could Go Wrong? 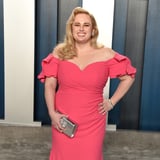 Rebel Wilson‘s latest project, an Amazon series titled LOL: Last One Laughing, already has us cackling into our morning coffees. The six-episode comedy series (which was filmed in 2019) is being touted as a “comedic social experiment” and involves 10 Australian comedians being locked in a house together for a six-hour competition that has no rules. Oh, except one: if they laugh, they’re cut.

Each comedian will participate in a series of skits where they can say and do whatever they like, except laugh. If a comedian laughs softly, they’ll receive a yellow card violation (just like in football). A second offense will earn the comedian a red card elimination, and they’ll be eliminated from the game and miss out on $100,000 cash prize.

If you’re not familiar with the Australian comedy scene, you’ll just have to trust me when I say that you’re in for a treat. With Rebel Wilson as host, the comedians battling it out for the top spot are: Dilruk Jayasinha, Frank Woodley, Nazeem Hussain, Anne Edmonds, Ed Kavalee, Becky Lucas, Joel Creasey, Nick Cody, Sam Simmons, and Susie Youssef.

Six hours of relentless improv with Australian comedians that have absolutely no limits – what could go wrong, right? You can watch the full trailer above. The first two episodes will drop onto Amazon Prime Video on Friday, June 18, episodes three and four will release on the following Friday, June 25, and the fifth and sixth (finale) episodes will air on Friday, July 2.