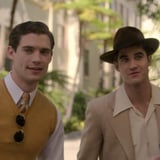 Ryan Murphy’s back with another Netflix series, and this time he’s taking fans to Dreamland. Hollywood, the third of Murphy’s productions for the streamer, takes viewers back to the Golden Age of Tinseltown with a historical twist. An eclectic group of characters become entwined while attempting to earn their time in the spotlight but find themselves changing the course of history to fight against a rigged system and biases across race, gender, and sexuality. With a surprisingly hopeful perspective, Hollywood asks, what would show business look like if the same prejudices that rule the industry today were dismantled?

With a stacked cast of actors, an ambitious premise, and the minds of Murphy and longtime collaborator Ian Brennan behind the production, there’s no doubt we’ll be tuning into Hollywood when it hits Netflix on May 1. Watch the trailer above!