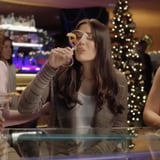 Ryan Reynolds is mocking the recent Peloton commercial controversy in an ad for Aviation Gin. On Friday, the 6 Underground actor shared the spot for his spirits company on Instagram. It stars the mystery actress currently known as “Peloton Wife” recently escaped from her home, husband, and stationary bike and grabbing a cocktail with two friends. The dazed woman tells them, “This gin is really smooth,” to which they reply, “You’re safe here.” She then raises her glass to “new beginnings” and downs her drink.

The widely-criticized Peloton ad was released last week and featured a husband surprising his wife with a bike on Christmas morning. It follows her workouts over the next year, after which she thanks her husband. “A year ago, I didn’t realize how much this would change me,” she says at the end of the spot, as they watch the video footage she filmed of her journey. The commercial was mocked on social media with users slamming the percieved message – that a husband would want his wife (who already looks pretty fit, if we’re being honest) to lose weight or change her body.

This Peloton spoof is just the latest; Reynolds is no stranger to trolling his fans, his famous friends, or even his wife, Blake Lively. Watch Ryan’s Aviation spoof above now, then see the original Peloton add below.