Schitt’s Creek Is Releasing a Documentary Special, and This Teaser Already Has Me Emotional 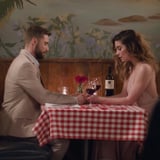 The Schitt’s Creek series finale is creeping up on us like David and Alexis on Moira’s collection of wigs, and the last time I felt this emotionally encumbered about a show ending, I didn’t leave my room for two days. Ahead of the show’s ending, the show released a heartbreaking teaser for an upcoming documentary special titled Best Wishes, Warmest Regards: A Schitt’s Creek Farewell. The hour-long special will go behind the scenes of the comedy series, giving fans a glimpse at never-before-seen footage of wardrobe fittings, the cast’s emotional final table read, audition tapes, and more. The special will also feature interviews with fan favorites, including Eugene Levy, Catherine O’Hara, Dan Levy, and Annie Murphy.

“It’s really hard to tell the story of a love story that in the end is still a love story,” Dan Levy said in a behind-the-scenes interview during the filming of Ted and Alexis’s emotional heart-to-heart. “It didn’t end because they stopped loving each other. It ended because circumstance stood in their way, and that circumstance was their own growth, and that’s a wonderful thing.”

The special is set to air on PopTV on April 7 following the series finale. Watch the full teaser video here and have a tissue on hand, just in case.