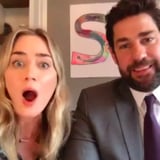 John Krasinski is back with more feel-good content! On Sunday, the 40-year-old actor released episode two of his YouTube series, Some Good News, to help bring joy during this challenging time. The uplifting 16-minute episode features a revamped introduction, weather forecast from Robert De Niro, and an incredible Hamilton reunion.

After spotlighting others online who have been inspired to release their own Some Good News segments, John spoke about the many efforts to manufacture much-needed medical equipment and protective gear. The episode was also as star-studded as it was inspiring: after hearing about a young Hamilton fan, Aubrey, who was set to see a production in Jacksonville before it got cancelled, John arranged for a virtual performance of “Alexander Hamilton” featuring Anthony Ramos, Daveed Diggs, Lin-Manuel Miranda himself, and many others.

“If you can’t go to Hamilton, we’re bringing Hamilton to you,” said John. Despite the fact that Aubrey admitted she has “never really seen The Office, or whatever,” John also promised to fly her out to New York to see the musical on Broadway at a later date!

John debuted Some Good News on March 29 with special guest Steve Carell. The two reminisced about their time costarring on The Office, including some of the funniest on-set moments and the cast’s tight-knit bond. John also chatted with a girl named Coco, who recently completed her final chemo treatment and was greeted with a socially distanced welcome parade in her neighborhood. At a time like this, we could all use some cheering up, so we can’t wait for John’s next episode!