Spider-Man: Far From Home Is Swinging Back Into Theaters With a Brand-New Scene 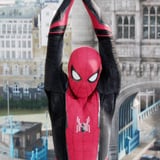 Your favorite web-slinger isn’t leaving theaters just yet! On Aug. 29, Sony Pictures is rereleasing Summer smash Spider-Man: Far From Home with an additional action scene. The extended cut of the film will feature four minutes of a never-before-seen action sequence, which Marvel fans in the United States and Canada will be able to go see (in IMAX, no less!).

So, what will this mystery scene entail? There’s no telling just yet, but we’d hazard a guess that the extra action will factor into Peter Parker’s (Tom Holland) clash with the film’s villain, Mysterio (Jake Gyllenhaal). And if we’re lucky, maybe it’ll give us a little more insight into that mind-boggling postcredits scene.

Spider-Man: Far From Home isn’t the only Marvel film to make a reappearance in theaters following its initial run, either. After premiering in April, Avengers: Endgame arrived back on the big screen in June with a bunch of bonus footage for fans – after the credits, Marvel added in a deleted scene, a special tribute, and a few surprises. The new footage in Endgame wasn’t added into the actual events of the film, so everything that happened within the film originally remained the same.

In other words, don’t expect the new action scene in Far From Home to change any of the narrative, but do expect to see more of Tom Holland’s perfect face.