Star Wars: Here’s Why There Are No Jedi Around Anymore 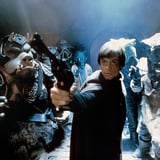 It’s official: we are less than one week away from Star Wars: The Rise of Skywalker. In the short period of time we have left, we’re brushing up on theories, remembering why we’re afraid of Emperor Palpatine, and carefully considering whether Kylo Ren is telling the truth about Rey’s parents. In today’s lesson, we’re reviewing what exactly happens with the Jedi throughout the series. Buckle up!

The destruction of the Jedi Order ultimately comes down to Darth Sidious. Introduced in The Phantom Menace as Senator Palpatine of Naboo, the secret Sith lord is the apprentice of Darth Plagueis. Together, they spent decades concocting a plan to eradicate the Jedi. Through manipulation and with Plagueis’s help, Palpatine rises up in political rank and becomes supreme chancellor. In a truly evil move, he kills Plagueis, despite the master’s intent to continue guiding his apprentice. He also gains emergency executive power over the Galactic Republic during a period of political turmoil called the Separatist Crisis, beginning the Sidious-orchestrated Clone Wars. During the conflict between the Republic and the seceded Confederacy of Independent Systems, public opinion of the Jedi Order, who are the generals of the Republic’s army, becomes increasingly negative.

In Revenge of the Sith, near the end of the war, Sidious reveals his true identity to Jedi knight Anakin Skywalker and tempts him into turning to the dark side. Jedi master Mace Windu engages in battle with Sidious when he learns his identity, enabling the Sith Lord to call for Order 66. Along with Jedi, the Republic’s army is made up of clones – but the Sith altered them with biochips that force them to kill the Jedi upon activation. Order 66’s execution activates the biochips and leads to the deaths of Jedi at the hands of clones on several worlds. Anakin, now known as Darth Vader, further denies the future of the Jedi Order when he mercilessly kills Jedi younglings.

Although the fate of the Jedi Order seems bleak after the Jedi Purge, there are a few survivors, most notably Obi-Wan Kenobi, Yoda, and Anakin’s own son, Luke Skywalker. Luke is effectively the hope of the Jedi. (Note: It’s also worth mentioning that Princess Leia, Luke’s twin sister, is also Force-sensitive. Though she never undergoes Jedi training, Yoda and Obi-Wan hint at her potential should Luke fail.) Through Obi-Wan and Yoda’s guidance, Luke learns to harness his Force powers. He assists in defeating the Sidious-led Galactic Empire and plays an essential role in the redemption of his father. Obi-Wan, Yoda, and Anakin don’t survive the events of the original film trilogy, but Luke promises to fulfill Yoda’s dying wish. As the last surviving Jedi, Luke will pass on his knowledge to a new generation and rebuild the Order.

The Force Awakens takes place thirty years after Return of the Jedi. Before the start of the film, Luke begins training a new generation of Jedi. Among them is his nephew, Ben Solo (aka the son of Leia and Han Solo), who struggles with the dark side. However, Supreme Leader Snoke of the First Order lures Ben to the dark side completely, after which he adopts the moniker Kylo Ren. In a Darth Vader-esque move, he massacres all of his fellow trainees. Luke, once again the last known Jedi, escapes and exiles himself, setting the events of The Force Awakens into motion.

Luke surrenders himself and becomes one with The Force in The Last Jedi, leaving Rey as the Jedi’s only hope forward. She’s not technically a Jedi, but unless Kylo Ren turns good, she’s the order’s best bet.