Still No Letter From Hogwarts? At Least You Can Now Watch All 8 Harry Potter Movies on HBO Max 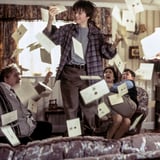 HBO Max launched on May 27, and it’s already pulling out the big wands. WarnerMedia’s streaming service came online with 10,000 hours of film and TV shows, including all eight Harry Potter films. So if anyone staying at home is hoping to tap into the magic of the wizarding world, all they need is a current HBO subscription or $15 a month to sign up for HBO Max.

The investment was an expensive one for WarnerMedia, who had to buy back its claim on all of J.K. Rowling’s wizarding world films – including the two Fantastic Beasts and Where to Find Them movies – after Universal nabbed exclusive rights in a 2016 deal. Kevin Reilly, HBO Max’s content chief, told Business Insider that taking back the franchise rights was “high on our priority list” and that there was “active engagement around that discussion.” Seems like they said the magic word and Harry Potter fans are reaping the benefits!

Not only can you watch all of Harry’s adventures from Sorcerer’s Stone to the Deathly Hallows two-parter, but HBO Max will include exclusive licensed programming, like all the seasons of Friends (and the big reunion) and The Big Bang Theory, as well as original content like Gary Janetti’s satirical animated TV series titled The Prince. But obviously, the first thing we’re doing is going back to Hogwarts!