The Books on Schitt’s Creek Are Easter Eggs, and Now We Need to Rewatch Everything 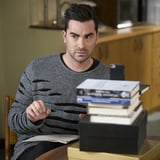 In season one of Schitt’s Creek, David takes a break from sharing a small room with Alexis and moves to his parents’ room while they’re away for the night. He leans back and starts to read a book called A Rare Sophistication: A Higher Aesthetic. Upon further research, it turns out the book is fake. In fact, Canadian Public Broadcasting confirmed all the works of literature the characters read are fictional.

Schitt’s Creek hides these faux literary Easter eggs in its episodes as a running gag that can be easily overlooked as props unless we pay close attention – I write this after what seems like my 10th marathon-watch. The texts don’t drive the episodes, and they’re rarely discussed in scenes, but that’s because they’re likely meant for the viewers, not the characters. Most of the book titles are either related to an episodic plot or a character’s personality. Ted gifting Alexis a copy of Opening Your Hearts to Animals: A Guide to the Benefits of Caring For Something Other Than Yourself after she expresses having a hard time around animals is a prime example of art imitating life on this show. Alexis is often self-absorbed at the start of the series (especially the first time she dates Ted) but later undergoes a major transformation.

Moira ostensibly shares a similar trait with her daughter, but her reading choices are more thematic; for instance, she reads A Knock on the Door in the episode “The Affair” after drunkenly knocking on Roland Schitt’s hotel-room door, which sets off rumors of a one-night stand between them; she’s reading A Hint of Amnesia in the “Open Mic” episode after inadvertently learning the sex of Roland and Jocelyn’s baby and forgetting about it. In one of her more animated scenes, she’s manning the reception desk at the motel and reading Blood Option; this pick can be taken to signal a subsequent scene where she makes up a story about the motel to get an ornery guest to take down a negative review. One of the lines she uses against him is: “When people ask me, why do you work here for nothing? I tell them, this is my flesh and blood!”

Then there’s Stevie, who spends most days (early in the series) reading a book or playing solitaire because she doesn’t like social interaction. On several occasions, Stevie’s caught reading Banshees on a Plane, which can probably be an accurate description of the Roses, especially Moira, whose penchant for dramatic shrieks becomes one of the many trademarks of her character. Stevie also reads Cypher Mind in “Carl’s Funeral,” which is ironic because she too has a bit of a “cypher” mind and is hard to gauge. In the same episode, David is shocked to find her getting wasted with her strange cousins, and she and David later get high and hook up. And in season six, Johnny gifts Stevie a business book he wrote titled Fast Forward to Success, which foreshadows the good news we see later in the season. It’s also probably the only book to impact the plot in that it directly inspires their plans for the Rosebud Motel Group expansion.

In the same season, Patrick is seen reading The Snowy Nook at the end of the episode “The Incident,” where David accidentally pees on the bed. Given how embarrassed David gets, the choice of book, which seems romantic, could be a sign of Patrick accepting all of David’s idiosyncrasies and wanting to build a life with him. It also seems to foreshadow the idyllic house they buy at the end of the series. David thinks it looks like Kate Winslet‘s cottage in The Holiday, which incidentally is covered in fake snow in the movie. Coincidence? I think not.

Much like The Snowy Nook and Fast Forward to Success, most of these works also seem to be offering relief to their readers, a coping mechanism that’s specifically catered to their needs that are not being met in their current surroundings. Moira and Stevie both struggle with the small-town life and lack of mobility, so we can surmise they lose themselves in books and use them as armor against the outside world. Stevie finds relief in Johnny’s business book because it helps her realize her career goals. Moira reads Sterling Bridges: The Actor’s Actor during Twyla’s murder-mystery party, which seems like a nod to her faux enthusiasm for the party; it also seems to signal her desire to get back into acting, especially right after she declines The Crows Have Eyes‘ movie sequel in the previous episode.

David’s relief comes from A Rare Sophistication, which we see on his nightstand several times, when he’s “trying very hard not to connect with people right now.” It accurately represents his character because he’s used to an upscale lifestyle he’s not finding in Schitt’s Creek – ranging from his Parisian eye creams to his monochromatic sartorial choices. Reading the book may remind him of his former life, but it appears to also be a source of inspiration he’s not finding around him, at least not at first. In fact, we can argue he’s applied the book’s tenets to his own store Rose Apothecary because “One of a Kind” is printed on the storefront window.

David finds his purpose in Rose Apothecary, and as the other characters find their own by the series finale, we don’t see them reading as frequently. It seems they no longer have to hide behind their books and from schitty situations because their relief has manifested into reality. This realization reaffirms the theory that Schitt’s Creek has wielded literature to frame its stories and tangibly track its characters’ journeys. The literature may be fake, but the emotions and growth are genuine. It’s only fair the finale is called a “Happy Ending.”