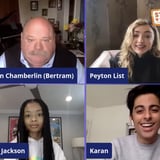 oThe cast of Disney Channel’s Jessie is remembering their late friend Cameron Boyce. On Friday, costars Debby Ryan, Peyton List, Skai Jackson, Karan Brar, and Kevin Chamberlin virtually reunited on the YouTube series Stars In The House. The show, hosted by musicians Seth Rudetsky and James Wesley, brings together famous figures to benefit The Actors Fund amid the coronavirus pandemic. The former castmates reminisced about their favorite memories with Boyce and the lasting impact he made on them.

Chamberlin (who played the butler, Bertram) opened up about Boyce’s bright spirit, calling him a “beautiful soul” before talking about his incredible energy and dancing. Jackson, List, and Brar (Boyce’s onscreen siblings) also remembered being in awe of his talent and positive attitude. “He made me such a better person,” List said. Jackson then recalled “how sweet and loving he was” when they first met.

Brar went on to share how they formed a brotherly bond, saying, “We were so close in age that we were both kind of just going through the same experiences and helping each other figure it out.” Ryan (who portrayed the titular character and Boyce’s nanny) also felt a familial connection to him that strengthened throughout the years. She specifically remembered Boyce comforting her when she was coping with her mother’s cancer battle. “I just will never forget that,” she said. “He’s so special.”

Boyce died from an epileptic seizure at age 20 in July. After his passing, Boyce’s closest friends and loved ones took to social media to pay their respects. Disney also honored the young star in an emotional video tribute that aired after the premiere of Descendants 3 – one of Boyce’s final projects.