The Cast of On My Block Say Season 3 Is the Best One Yet: “Nothing’s Off Limits” 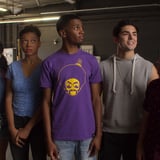 After leaving us on a major cliffhanger at the end of season two, Netflix’s On My Block has a lot of explaining to do. Even with the latest trailer for the third chapter, we’re desperate for answers. In the clip, we see the Core Four – Monse Finnie (Sierra Capri), Cesar Diaz (Diego Tinoco), Ruby Martinez (Jason Genao), and Jamal Turner (Brett Gray) – and honorary member Jasmine Flores (Jessica Marie Garcia) embark on a new mission after being kidnapped by Cuchillos, the Santos gang leader.

Apparently, Lil’ Ricky is alive and Cuchillos tasks the group with tracking him down – or else. Of course, things don’t go as planned and our favorite teen investigators are taken on a wild ride. Will they find Lil’ Ricky? Are they going to maintain their tight-knit friendship? Is season three going to be as emotional as season two? Will they ever do regular homework?! We have so many questions ahead of the show’s March 11 release. Thankfully, the five-strong team spoke with POPSUGAR about what to expect in the forthcoming episodes.

POPSUGAR: First, congrats on season three! How did you feel about returning for more adventures?

Genao: I was excited after reading the script and knowing that I was going to have more fun than I did for season two because that season was so dramatic for me. So I was more excited to know that it was going to be like season one again in terms of the fun times.

Gray: I was really excited, too. For my character, there’s so much happening with him that is somewhat of his own story. This time, I was excited to have more scenes with Ruby. We get to do stuff at the pool, and we’re getting back to our antics from season one and what those relationships were like before sh*t went down.

Tinoco: For me, I was happy to see that everything for Cesar is about positivity and exploring his relationship with Monse and other people in his life.

Capri: Yeah, I like that we get to see relationships evolve between characters as they try to find out more about Lil’ Ricky. That’s something that continues to happen every season, but I think this season more than ever.

“Whatever people think is going to happen is not how it happens.” – Brett Gray

Garcia: I’m just really excited that our fans get to see Jasmine be a part of the group a little bit more. We have great fans rooting for us to be friends, and that means everything to me.

PS: Jessica, we’ve really seen Jasmine grow and develop as a person over the past couple of seasons. She’s actually one of my favorite characters. What’s been the most exciting part about portraying her evolution?

Garcia: Well, first of all, your taste is impeccable. I really appreciate that. I’m in a constant state of gratitude because [the writers] didn’t decide that she was just going to be a side character. They let me show these different layers to her. If you don’t know a Jasmine, you are most likely the Jasmine of your friend group, and you’ve dealt with situations that can harden you. You’ve built a wall and use comedy, self-deprecation, or your sexuality to keep someone from seeing the real you. For my character, that comes from a lifetime of not feeling good enough or having to be her father’s caregiver. It’s actually very deep and takes you to a vulnerable place. I’m happy to show the audience that evolution. There’s a lot of wisdom to Jasmine, and we’ll get to see more of it in season three.

PS: For you, Sierra, what aspects of Monse’s life were the most interesting for you to explore in season three?

Capri: She goes on an emotional roller coaster every season, but this one is special because she has a female friend to lean on, and that’s Jasmine. The loss of her previous female friend affected her relationship with the rest of the guys and the way that she felt she could relate to them. But fans are going to be really glad to see a lot more of Monse and Jasmine this season. That’s what I’m most excited about.

PS: What do Jasmine and Monse bring out of each other that makes their bond so special?

Capri: Monse tends to overthink, and Jasmine allows her to go with the flow, let loose, let her hair down, and live in the moment. Monse is always so worried about what’s happening next or what’s going on around her, and she doesn’t really enjoy being a kid.

“Nothing’s off limits. Everything that you have thought about our show, it can all change in an instant.” – Jessica Marie Garcia

Garcia: For Jasmine, Monse really gives her a home, in a way – a friend. I don’t think Jasmine ever had a girlfriend before, but now she has somebody to share a sisterly bond with. That’s something Sierra and I have been fighting for since day one. We wanted there to be more girl power. Their relationship is very special, and I think a lot of girls are going to see their friendships reflected through ours.

PS: I love that you were advocating for that. Now, Brett, we all know that Jamal loves an adventure and a good mystery. The wheels are always turning. What does his season three journey look like?

Gray: Well, Jamal actually finds love this season. He has a love interest, and I think that’s the only frontier he hasn’t truly explored yet. He’s coming into his own and realizing his worth, not just in terms of friendship and in terms of what he’s doing, but also in terms of who he is as a young man and where he wants to go in his love life. Also, people will see that he wants to take charge in how the group handles situations because they always overlook him. He’s going to learn a lot about confidence.

PS: What about Cesar? What’s in store for him, Diego?

Tinoco: He’s pretty optimistic this season. He’s still the same hopeful kid with a good heart who just wants a better life, wants to be with Monse, wants to hang out with his friends, and wants to go to school. But he definitely has a lot more on his plate than he had in seasons one and two, and he’s tackling some pretty deep obstacles while figuring out his life. I was shocked by the ending of season three. I didn’t see it coming at all – not the slightest bit. I was surprised, and I honestly didn’t want to film it because it was so heartbreaking. But I trust the writers.

PS: You guys always leave us on some crazy cliffhanger at the end of a season. People’s emotions are going to be all over the place. Jason, please tell me Ruby is going to be OK at least. He really went through it in season two.

Genao: Season three isn’t as emotional for him as season two. Ruby is getting back to that Ruby-esque like, ‘I’ve got to take charge of everything, and I’ve got to make sure everything is done by me because that’s the only way it’ll be done right.’ He also likes the girls again. In season two, he gave all that up because he lost the love of his life. But, of course, there are still those emotional scenes that I have to tap into. Thankfully, the set is so energetic and fun that I can do those scenes and then quickly get into a headspace where I can be in a funny scene with Jasmine. We’re like a family.

PS: Why should fans be extra excited to slam on the “Play” button when season three hits Netflix?

Gray: Whatever people think is going to happen is not how it happens. Fans are going to love it because what happens makes so much sense, even though it’s not what you expect.

Garcia: Nothing’s off limits. Everything that you have thought about our show, it can all change in an instant. Our writers have been really great about keeping you on your toes and not taking any relationship, any situation, or any character for granted.

Genao: I’d say it’s the joy of season one with the heartbreak and drama of season two combined.

Tinoco: This is the best season yet. There are explosions, there’s sex, kissing, people being lit on fire. The stakes have never been higher. There’s so much on the line, including our lives.