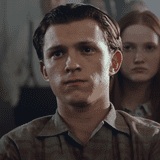 I could not have been more excited when I heard there was going to be a movie starring Robert Pattinson, Tom Holland, Bill Skarsgård, and Sebastian Stan. Then the trailer for Netflix’s The Devil All the Time, which is based on the 2011 novel of the same name, dropped and I wasn’t entirely sure what kind of movie I was looking at. The film, set in Ohio between the end of WWII and the beginning of the Vietnam War, follows a non-linear storyline of various “disturbed” people. If anything, that’s the exact vibe the trailer gives off.

From Tom Holland’s seemingly Southern accent and Sebastian Stan’s tiny hat to Robert Pattinson’s oddly seductive taste test, the whole trailer is one wild ride. What’s even more wild is just how stacked the cast – which includes Mia Wasikowska, Riley Keough, Haley Bennett, and Eliza Scanlen – is with talent. Granted, this isn’t the crossover I had in mind when I envisioned a movie with Holland, Pattinson, and Stan, but I guess it’s the one we got. As for how dark the film is going to be, based on the small glimpses of violence we see and the fact there’s a serial killer (played by Jason Clarke) involved . . . it’s safe to say it’s going to be pretty dark. You can see for yourself when the film premieres on Netflix on Sept. 16.