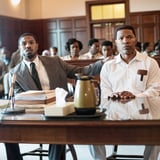 Warner Bros. Pictures is offering rentals of its poignant 2019 film Just Mercy for free during the month of June. Based on the real-life work of civil rights attorney Bryan Stevenson, the film follows Stevenson (Michael B. Jordan) as he looks into the case of death row inmate Walter McMillian (Jamie Foxx). McMillian was arrested for the murder of an 18-year-old girl, and despite having a clear alibi with witnesses, was sentenced to die in 1987. The powerful biopic not only features some of Jordan and Foxx’s best work ever, but it highlights the inequality of the criminal justice system in America.

Michael B. Jordan Explains the Poignant Message Behind Just Mercy: “It’s So Timely”

According to the announcement on the film’s official Twitter account, Just Mercy is being released for free rental in response to the worldwide protests against police brutality toward Black Americans. “We believe in the power of story,” the caption reads. “Our film Just Mercy, based on the life work of civil rights attorney Bryan Stevenson, is one resource we can humbly offer to those who are interested in learning more about the systemic racism that plagues our society. For the month of June, Just Mercy will be available to rent for free across digital platforms in the US.”

The post adds, “To actively be part of the change our country is so desperately seeking, we encourage you to learn more about our past and the countless injustices that have led us to where we are today. Thank you to the artists, storytellers, and advocates who helped make this film happen. Watch with your family, friends, and allies. For further information on Bryan Stevenson and his work at the Equal Justice Initiative please visit EJI.org.”

We believe in the power of story. #JustMercy is one resource we can offer to those who are interested in learning more about the systemic racism that plagues our society. For the month of June, #JustMercy will be available to rent for free on digital platforms in the US. @eji_org pic.twitter.com/3B2IHMNk7E

Interested viewers can watch the film on Amazon Prime Video and Youtube, as well as on Apple TV.