Yep, You’ve Heard the Voiceover in The Mandalorian Season 2 Trailer Before 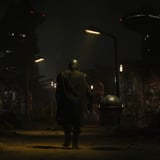 The first trailer for The Mandalorian season two is officialy here, and you definitely will recognize the person speaking over the bulk of the trailer. Although the footage is new, and there are even a few glimpses of new dialogue, the main portion of the voiceover is actually something we’ve heard before.

“Show me the one whose safety deemed such destruction,” a woman’s voice echoes. “You must reunite it with its own kind.” If those words sound very familiar, it’s because they are. We’re hearing the voice of the Armorer, the Mandalorian armor-maker who showed up several times in the first season, played by Emily Swallow beneath the helmet. As viewers will remember, she encountered Din Djarin throughout the season, eventually making him his fresh set of armor and, in the finale, meeting the Child. She is the one who reminds Djarin of his traditional duty to care for the Child and to reunite him with his own kind, placing him in the role of temporary father to the adorable little guy until he can return him to his own people. As one of the surviving Mandalorians in hiding, the Armorer served as an important link to our hero’s roots throughout the season.

The Armorer’s dialogue with Djarin also reminds us of the setup for the new season. “The songs of eons past tell of battles between Mandalore the Great and an order of sorcerers called Jedi,” she tells him (and us). The main plot of the season appears to be Djarin’s quest to find the surviving Jedi and get the Force-sensitive Child into their care. Of course, as the Armorer reminds us, this means that Djarin will have to face some serious inner conflict: trust the “race of enemy sorcerers” who have been against his own people with his own safety and that of the Child he’s sworn to protect, or fail in his duty to bring the Child home? We’re sure there are lots of twists to play out when The Mandalorian returns for its second season on Oct. 30!