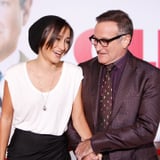 Zelda Williams is honoring father Robin Williams‘s legacy on what would have been his 69th birthday. On July 21, the actress and director took to Twitter to announce that she was donating $69.69 to “as many local homeless shelters as [she] can” to celebrate her dad nearly six years after his death. “Join me if you like, but regardless, know I am wishing you all at least one hearty, immature belly laugh on Dad today,” she continued.

Zelda tweeted screenshots of her donation receipts from organizations, including the Los Angeles LGBT Center, GLIDE, and Union Rescue Mission. Fans also joined in on donating in the late actor’s honor, and thanked Zelda for both the thoughtful and amusing idea, as Robin brought joy to so many people through his humor.

On Aug. 11, 2014, Robin died at the age of 63 after battling severe depression. Shortly after his death, Zelda shared a sweet message about her dad. “I love you. I miss you. I’ll try to keep looking up,” she wrote on Twitter. Ahead, see how Zelda beautifully celebrated what would have been her father’s 69th birthday this year.